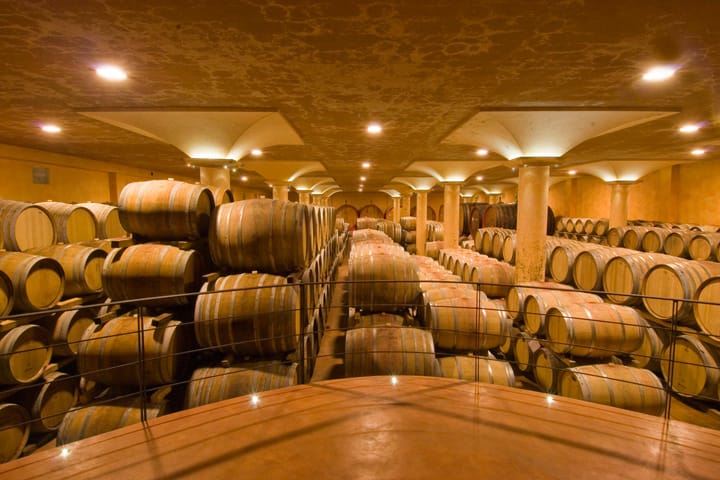 The hill of Montalcino rises up like an island in the very heart of the Tuscan countryside. Far from the traffic, in wild, pristine surroundings, our wine tour of Montalcino takes us to a territory where the magical relationship between man and nature can be sensed everywhere. A land of tireless farmers, Montalcino had its heyday during the struggle for communal liberty in the 15th century when its proud citizens were able to resist the siege of French and Spanish troops.

However, Montalcino is best known world-wide for its unique wines, the fruit of a centuries-old wine-making tradition. Montalcino is home to the acclaimed Brunello di Montalcino, the fruit of years of wine-making experience and tenacious passion. This wine is lovingly aged in the cellars before it is presented to the world. The Rosso di Montalcino and the Brunello, one of the best Italian wines, are a legend of Tuscan wines that is renewed with each new bottle.

Our wine tour will take you on a journey to discover this charming Tuscan town and the best wineries producing Brunello, where you will be able to taste and buy some of the very best vintages.

Casanova di Neri is one of Tuscany's top-rated wineries on the international stage. Established in the 1970s by Giovanni Neri, this family-run business has its strength in small numbers. A genuine passion in taking care for the fifty five hectares of vineyards scattered throughout the best areas of Montalcino and peerless competence in making wines of great elegance and texture resulted in excellent wines such as Brunello 2001 Tenuta Nuova, which earned the first place in Wine Spectator's Top 100 list.

Located in the Fiesole estate, the Casanova di Neri cellar is an impressive underground cellar built right next to a 16th century building. Our tour includes a visit to the cellar and a relaxing stroll through the superb Montalcino vineyards, followed by the tasting of two "Brunello di Montalcino" wines.

Fattoria Poggio di Sotto is one of the best known and appreciated wineries for the production of DOCG Brunello di Montalcino and DOC Rosso di Montalcino on the domestic and international stage. It is part of a Tuscan domain including three wineries lovingly run with great dedication by Claudio Tipa and his sister Maria Iris: Castello di ColleMassari since 1998, Podere Grattamacco since 2002, and Fattoria di Poggio di sotto since 2011.

The estate is located on a small hill near Castelnuovo dell'Abate, an old village set in a God-blessed region as far as vine growing is concerned, with the Sant'Antimo Abbey for celestial protection on the right-hand side and Mount Amiata as a barrier against bad weather on the left-hand side. The Brunello Poggio di Sotto is an excellent and unique wine that is the result of great care on the vineyard, careful selection of grapes, long wine-making process consisting of four pump-overs a day for 28 consecutive days and aging in big 32 hl Slavonian barrels for five years.

This estate derives its name from the Montalcino dialect stressing the roots of the Gorelli family that is strongly attached to this territory. “Potazzine” is an affectionate nickname given to Viola and Sofia by their parents and grandparents when they were little girls. Established in 1993, the winery has achieved rapid success thanks to enologist Giuseppe Gorelli's great passion and hard work. The cellar has recently been built but it keeps all the features of traditional Tuscan country houses intact. It is divided into two areas, one for wine making and the other for wine aging. This winery produces about 35,000 bottles a year of Rosso and Brunello di Montalcino.

Nostra Vita is a winery located in a beautiful area between Montalcino and the Sant'Antimo Abbey. The Parisi family purchased the property in 1970 and gave it an evocative name for future success. The vineyards are located at about 450 meters AMSL, where the microclimate is perfect for Sangiovese growing to produce high quality Rosso and Brunello di Montalcino. All the vineyard work and the harvest are strictly carried out by hand in accordance with the vine-growing and wine-making tradition of this territory.